Why is my motorhome named Ellie?

Because someone that missed out on an email thread asked me what the heck I bought - a white elephant? In fact, yes, I did do that. Thus the name Ellie was born.

I've been asked to post a page about my motorhome, so this is that page.
This page is just for photos of Ellie. I have another tab created for My Motorhome Upgrades & Repairs  that I've done to my Motorhome.

Ellie is a 1996 Coachmen Catalina Sport 220 RK (which means rear kitchen). I bought her in 2006. Although I've looked at other rigs, I keep coming back to mine & am grateful for the space & storage that she contains. Although some big basement storage would be lovely! However, she wasn't built for that. As a fulltimer, it's not only about having something that is decent to live in, but it's also about having space for your items.

Especially if you have pets to share your rig with. I'm not typical as I also have show dogs, so my dinette area has been taken out for crating space as they have to travel in crates. I know some would not like that, but for my personal comfort level & theirs, I feel it's safer that they travel in crates. Things can happen. I could have to hit my brakes & they could get harmed. A cabinet could open & something heavy could fall onto them & hurt them. So for us, it's safer that they travel this way.
I also set out expens for them when possible so they can play & stretch their legs. They are not the kind of breed that you can tether or let run off lead. 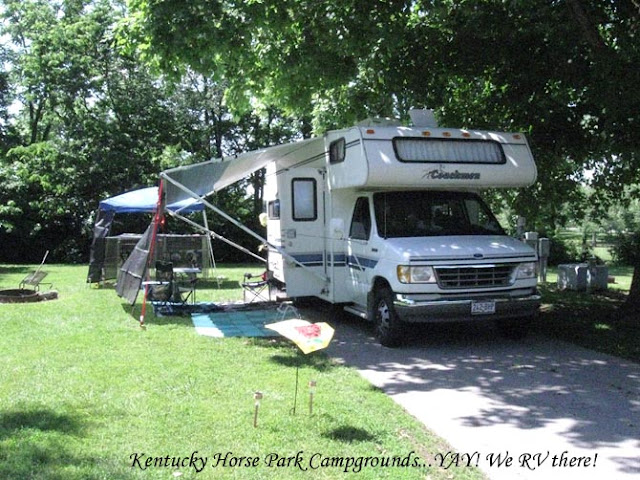 Here we are camped at the Kentucky Horse Park. Behind my awning is a canopy with my dogs pens set up under there. They love to go out & hang out in their pens when they aren't going for walks & such. (photo is grainy because I took it with my point & shoot camera) 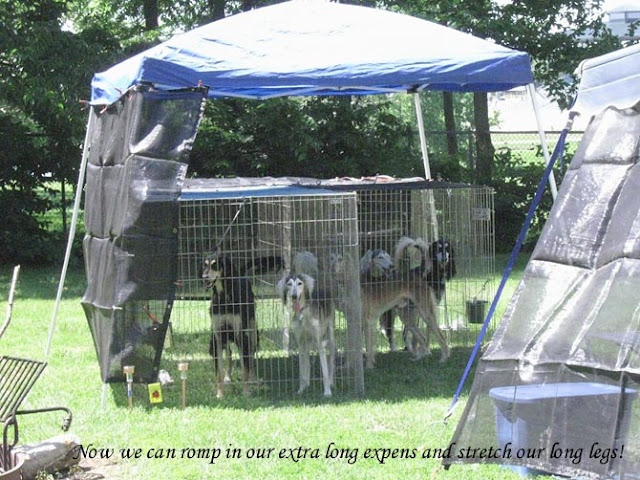 A crew of very happy dogs! 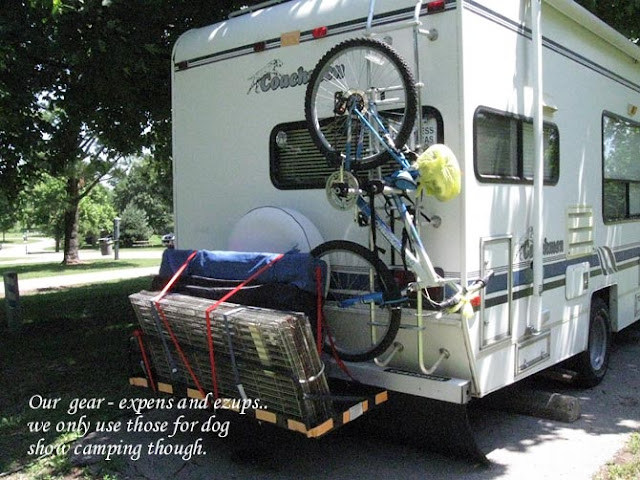 Another grainy pic taken with el-cheap camera. btw, that is my toad on the ladder ;-) 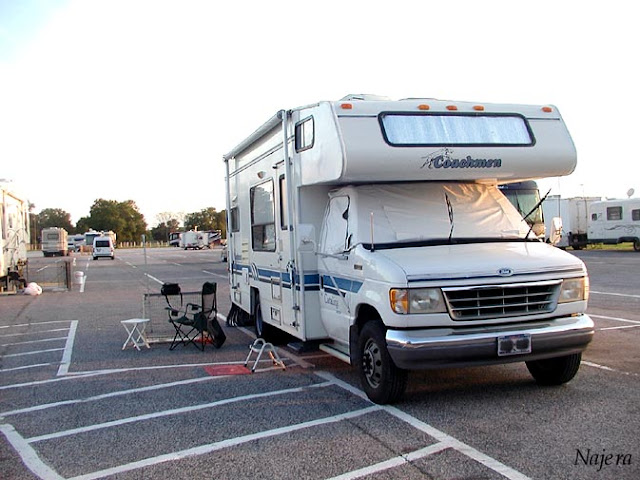 Ellie Doggin' it at a dog show. A lot of our dog shows are boondocking on concrete parking lots. We had Iffy weather that weekend, so the awning stayed in & I only set out what I needed. You can see other rigs set up in the parking lot as well. This place, I parked in the 2nd parking lot as it's better for us RVers that don't want to be banked against each other, eating generator fumes. 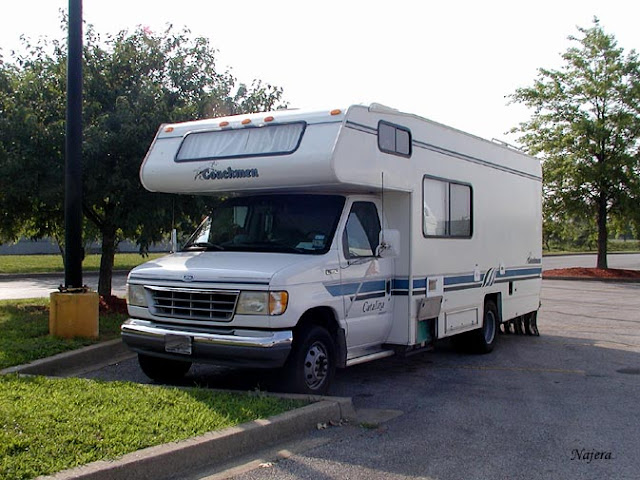 Another cool thing about Ellie is her size. I was able to squeeze into this space in a WalMart Parking lot! This was in an RV parking area. The bigger rigs were a few feet away, all pulled in amongst semi trucks. I was able to sneak into here & be away from their generators & truck noise, yet was in the appropriate area of the parking lot. Ellie is a 22' ClassC Motorhome. 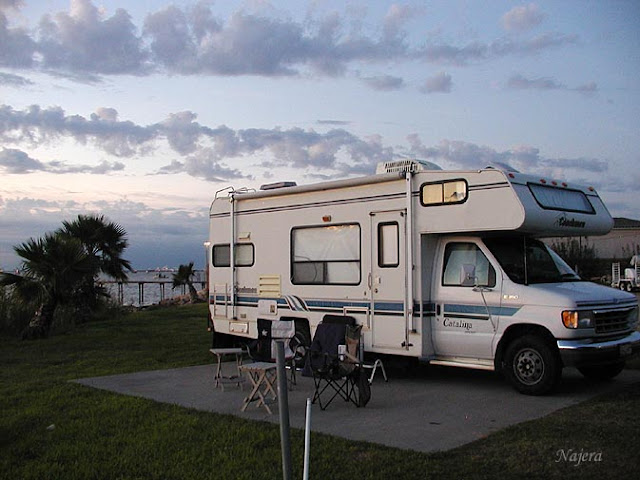 Another shot of Ellie being able to park on a small pad in an RV park. Eagles Point RV park in San Leon, TX. Overlooking the bay. Too windy for the awning & I was only spending one night there.
~Now for interior pics, I think I've sent enough exterior ones huh?
Bedroom: (ok, so overhead bed area) 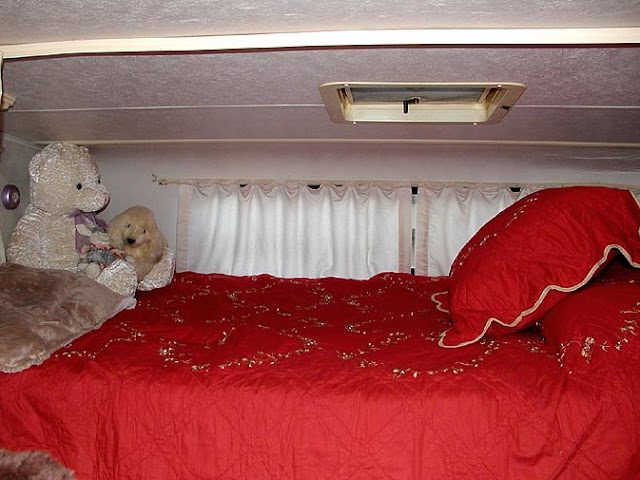 My over head bed area. Soooo comfy! The stuffed animals might seem a little silly. They all have meaning. The stuffed puppy is an Afghan Hound Puppy given to me by my sister. The little pig toy (which doesn't show up well) belonged to my beloved Vida (saluki). When she passed, I put her toy in the RV. The teddy bear was given to me by someone special.
My dash also has animals on it too as they were gifts as well.
Back to the bed. I have the typical cushions that overhead beds have, but they aren't really comfortable to sleep on. So I put a sheet over those & put a memory foam topper on top. It's a full sized topper & very comfortable for me. When I saw this red bedspred, I just HAD to have it!! It helps to sleep under something that you like! What this pic doesn't show is that at the end where the pillows are, is an open space. In that space, I have 3 bag chairs & a bagged slatted folding table that store there. 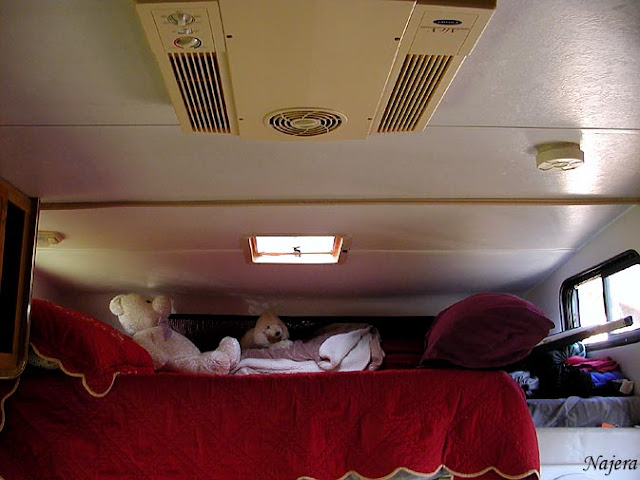 Oh wait, I just found a photo of the overhead bed area without the curtains up! This was after the rebuild, so you can see where I store the chairs & my ladder, which serves as my stair case to get into bed with. 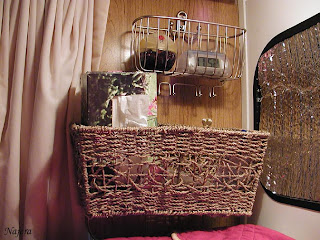 I also added these baskets to contain things in my bedroom area. I had no shelves there, so needed a place to put kleenexs, the alarm clock, air freshner & hand lotions. I also put reflectix over my windows. It helps when I'm traveling, escpecially when in Pa since the sun comes up really early in the morning there! And it keeps the RV better climate controlled. I've not made new curtains for the windows yet.
Bathroom: 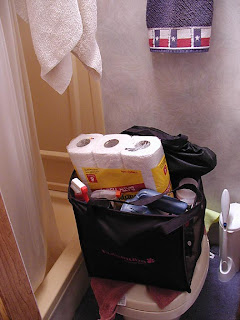 My bathroom. It has one of those sitting type of tubs. In the tub, I keep this little bin that has a few cleaning supplies & essentials. My cabinet in my bathroom isn't very big, so I keep this bin in my tub when it's not being used. I also have a fold up laundry hamper that I store in the tub as well. I take them out to shower, then I dry my shower & return them. 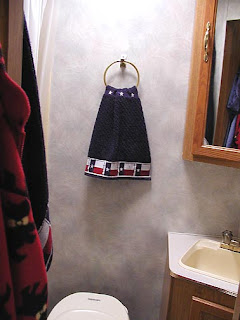 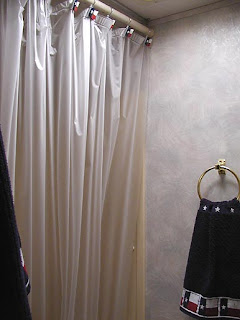 Taking pics with my bigger camera is difficult as the camera doesn't do close range. But you get the idea of how it's set up. And I love my little tiny Texas flags that hold up my shower curtain!
Kitchen: 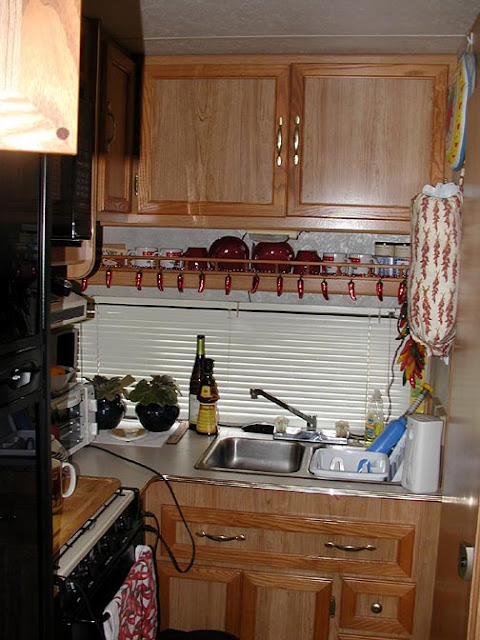 For more kitchen views, click here. I love my cute little kitchen! The kitchen is in the rear of my rig. As is the bathroom. The bathroom is off to the right, behind that door that is hard to make out in the kitchen photo.
Living area: 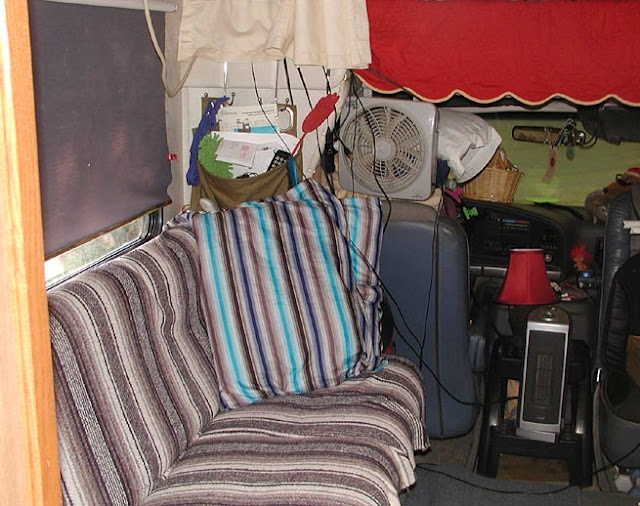 Sofa area. This pic was taken after my surgery. I keep the sofa covered as it's a jack knife sofa & has an opened area between the cushions. Things fall into that area, including my remote control! You can also get a glimpse of the cockpit area. I keep a stool between the front seats & the seats also rotate around. It doesn't make sense to rotate the drivers seat though because of the sofa & steering wheel gets in the way. But I do use the passenger seat. Usually, when I have that seat turned, it becomes my computer station as it's easy to just leave the laptop set up & resting on the stool. That way, the stool also funcitons as a table. 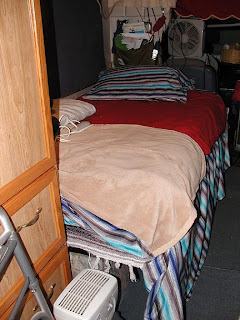 And here is a photo of the sofa folded down into a bed position, with the air mattress & bedding on top. Very cozy! But I prefer to sleep in the overhead bed.
I don't have any photos of the closet cabinets, but they are beside the sofa & across from the dining area.
Below is an older photo of the dining area, which has been converted to the crating area. I no longer carry the extra crates on top. I no longer need to use them inside of dog show buildings, so they now stay stored in my van instead. I also took out the bench that is to the left of the picture so I could add two more crates to that area. The bench under the TV has to stay as my furnace is under that area, as is my converter. I actually still have the table top & poles. Those I still carry in the RV.
I figure if I ever take the crates out, I can still set the table back up in the future. 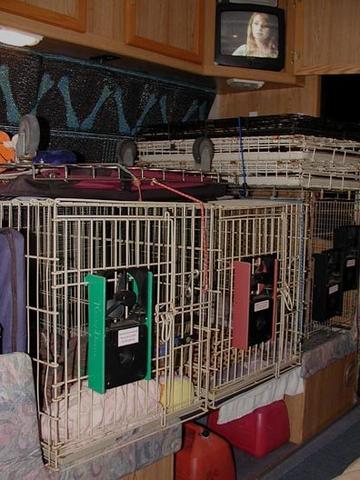 That old tv has been switched out for a flat screen tv on a rotating arm. I can swing the TV back into the cabinet & close the door for traveling. I also use a DTV box to get the free channels & a DVD player is connected as well. 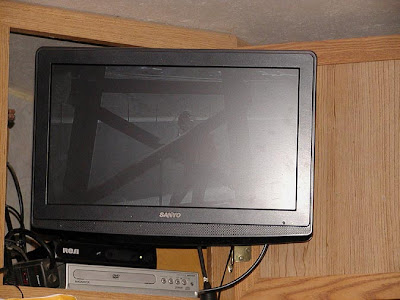 I also have a video of Ellie! 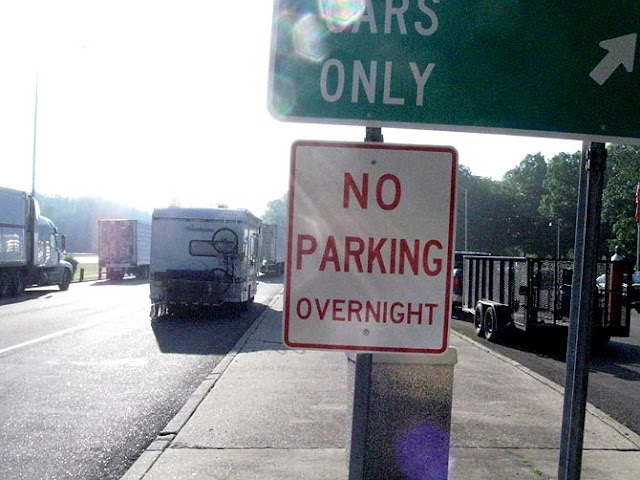 The end. Oops, I overnighted there...

Please feel free to leave comments, I do read them and sometimes, I even learn something!

I do not allow spam links or spam comments. Those get deleted.

Have a good one and Live the Life you Love!

TexCyn
I've lived on the Texas Gulf Coast since 1980, or thereabouts. I've been showing dogs since 1982, they are the love of my life. My 2nd love is my RV - motorhome, which I named Ellie. I look forward to each time I get to take Ellie out on a trip, all dogs along inside. They all love it too. However, most of my traveling is to dog shows. In the future, we'd all like to do more traveling around the country, visiting friends and points of interest. Please visit my creative side at www.creationsbycyn.blogspot.com My RV side at www.texcynlife.blogspot.com

visited 22 states (44%)
Create your own visited map of The United States or Like this? try: Chinese Radicals